I’ve spoken these words too many times to count over the last few years. Too many times to count, I’ve spoken them recently in a state in which I’ve been overwhelmed with gratitude for what our God has chosen to give us—in spite of all the bad news and the odds that never seemed in our favor, in spite of doctors telling us what the world knows to be true, and in spite of believing that our chances of pregnancy had gone from slim to none—our sweet daughter is growing in my womb.

I also remember speaking those words in such a different state of mind as well, one in which I was struggling so hard to believe them that it terrified me, and I could do nothing but repeat them over and over in hopes that they would heal those pieces of me that were broken and scattered, pieces of me I didn’t believe were important enough to be saved and preserved. I wanted to believe that my God was still willing to gather up my broken pieces and heal me, but all I could see was the darkness of my surroundings.

I’ve said them through tears, while crying out in pain, in the darkness of my room with my curtains drawn closed because the fact that the sun still rose amid my grief caused me even more pain. I’ve said them on drives home from my doctor after receiving more bad news, I’ve said them through midnight panic attacks after waking with my heart pounding in my chest. I’ve said them through rounds of fertility treatments that didn’t work, as my mind and body seemed to both be attacking me at once, as I gained fifteen pounds in three months, as I suffered unpredictable mood swings and would sometimes sob uncontrollably for any small thing. I’ve said them hundreds of times while not necessarily believing them, while not hearing the words that were coming out of my own mouth, with even hardly acknowledging the presence of my God that had never abandoned me through it all.

In December of 2016, going on one year of my husband and me trying for a baby and only a couple of weeks prior to my visit to the doctor that would change everything—the visit where I received a diagnosis of infertility—God had placed it on my heart to not only begin praying fervently for our future family, but to have the courage to ask Him for my deepest desires. These desires were ones that I’d ignored for a long time, ones that I forced to the back of my mind out of fear of pain and disappointment—my desires for, not only a sweet child to love and cherish, but the opportunity to carry that child inside of me. These were desires I’d been used to hiding since I’d learned of a variety of issues within my body that would likely make it difficult for me to get pregnant when I was only fourteen-years-old. I’d always believed myself to be someone who had been born with the heart to adopt, and another one of my greatest fears was that if I admitted my desire for pregnancy, I would be treating adoption as a last resort.

The fear of hearing a confirmation of what I’d already suspected to be true a year out from when we first started trying for a baby—that I might not ever have the opportunity to experience pregnancy—was something that had started in just a small, dark corner of my mind, something that was easy to ignore and hide behind activities, travel, and the pursuit of other dreams. But with each month that passed, that dark corner was growing and spreading, becoming something all-consuming and no longer an option to ignore.

God knew I was hiding from Him, avoiding being honest in my prayers, unwilling to admit where my mind went at night when I was alone and silent out of fear that speaking these thoughts out loud would somehow bring my nightmares to fruition. But even amid my avoidance, He heard me—my thoughts, my fears, the prayers I wasn’t brave enough to speak to life. And He took hold of my heart through the words of a song. The simple words that would be my constant prayer for the next three years, words that I’d repeat despite struggling to believe them, but words that remained true through every moment of pain, heartache, and desperation. 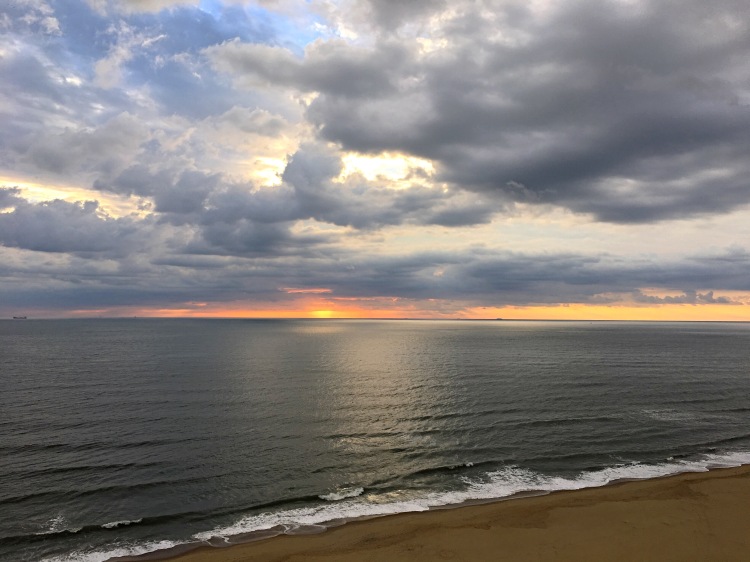 The first time I responded to the urge from God prompting me to ask Him for my heart’s desires was the day I heard the song King of my Heart by Bethel Music for the first time. I had attended their concert, and although I wasn’t ready to submit to God in that moment, the words of the song echoed within me, urging my heart to repeat and believe them.

God was urging me to not only pray those words, but believe them, to believe that He was good in every moment, now and always, and in all situations. In asking Him for what I wanted, I knew I would be relinquishing control over my own heart, making myself vulnerable, acknowledging that I didn’t know where I was headed, but recognizing that I didn’t need to know. He wanted me to trust Him enough to not only ask Him for what I wanted, but trust Him enough to believe that even if I was facing the greatest heartache of my life, that He would still be good. (A Series of Promises, Part I)

I heard that song again recently, the song I had been given at the beginning of our long, unconventional journey to parenthood, only this time, I sang it standing on the other side of it all, seeing all the things I couldn’t back when God had first broken down my barriers, His promises of peace and rest, strength and joy amid our suffering. Promises of a story of grace, that we would be evidence of His love still living among us, that He would redeem both my mind and body, that He would never abandon us in darkness, but instead, gather every broken piece of us and keep them safe until it was our time for healing and restoration. (Scattered). I sang those words while feeling the sweet sensation of our precious daughter moving around inside me, our light and lifelong reminder of His faithfulness, a blessing of which I wholeheartedly admit I’ve done nothing to deserve. 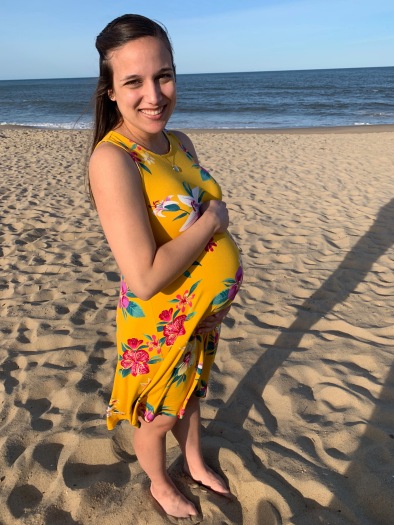 I questioned God. Why? Why is my future so silent? Why does it all seem so empty? Has this journey been for nothing? Am I wandering aimlessly with no destination in sight?

He took my hand and led me forward, though I fought Him every step of the way. I didn’t want to see a vacant horizon, but He kept urging me to keep moving. He told me that I didn’t understand now, but this was merely a season. This emptiness would pass, as all seasons do. Suddenly, the ground before me began sloping upward. The path grew more wearying, but God held me close to Him and kept me from stumbling. We kept going until finally, we found ourselves at the edge of a cliff, looking down over a beautiful, vast city in the middle of a valley.

That was when I realized that my horizon had never really been empty; I just hadn’t been able to see what was in it, because I had been traveling uphill. The road before me had been difficult, but it had led to much more than I could have ever imagined.

There have been so many moments of my life where I was ready to lay down and surrender myself to the darkness surrounding me. Moments of hardship and trial that exhausted every bit of me, moments where I truly could not see myself surviving, moments where I would distance myself from God because I’d been so convinced that I must have done something to deserve the pain I was feeling, moments where the only times I’d cry out to God was in questioning, moments of self-deprecation where I’d isolate myself from anything that might have allowed light to shine on those dark corners inside me. Even on the worst of days, I’d known God’s promises, but had chosen not to believe them out of fear that maybe somehow, those promises didn’t apply to me, or that maybe, if I claimed those promises I’d somehow be left even more broken or disappointed. I’d been fortunate to have a strong support system in these moments—in my husband, family, and friends—who would encourage me and remind me of truths I didn’t want to hear, who would stand up and say those words in confidence when I had none.

In speaking those words amid the dark moments—and all the times my husband, family, and friends spoke those words for me when I couldn’t—God’s presence, while always there, was growing more evident around me, bringing me comfort and warmth like a warm breeze, breaking through my darkness like the moonlight shining through a window at night, sustaining me like the oxygen that filled my lungs, reminding me that I was still alive, that there was still so much life ahead of me, that He was still here through it all.

At the beginning of my pregnancy, I often wondered why God allowed us so many setbacks, so many moments of pain and disappointment, so many poor test results, phone calls with more bad news, opportunities to nearly achieve the family we’d so desperately been longing for that slipped through our fingers. So many days of deep grief right before giving us our precious, miracle daughter. The answer had been before me all along, though I hadn’t had the clear eyes to see it until now.

Now, standing on the other side of that wearying journey, at the end of a winding path that I sometimes believed would never end, after having finally reached the point where I can look down at my beautiful, vast, full horizon that had once been hidden by a rocky, uphill slope that I could have never made it through alone, I see it. I look behind me and see every rock that made me stumble, every steep piece of my path that made me want to give up, but now I can also see the evidence of my God’s hand in it all, the hand that reached out and caught me before I fell, the hand that held me up and pulled me through the steepest moments of my journey. I can see how every piece of my path became an important chapter in the story of my journey, a testament of God’s saving grace that He had been intricately planning and building for me all along.

On those difficult days where I could barely speak, let alone continue singing the song that God had given to me so long ago, He was still there, gathering up those scattered pieces of myself and keeping them safe for me until my time for healing came, knowing that when it finally did, I would be able to sing those words without doubt or hesitation, believing them and engraving them on my heart, proclaiming them for everyone to hear in hopes that I might serve as evidence that He is still living and moving among us on this earth, available to all who choose to see and believe in Him, and in those simple, precious words of truth. 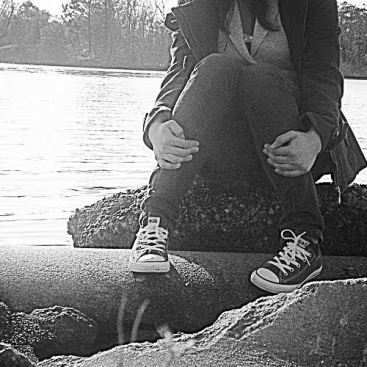